LED Light Sheet panels have been used to provide discreet illumination to the stained glass entrance canopy of one of the most prestigious theatres in London’s West End, The Aldwych. 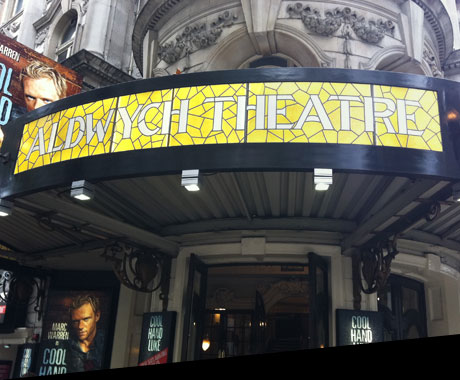 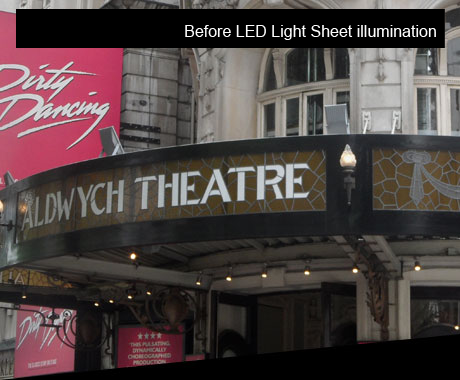 ‘The results were amazing. The managing director and all theatre staff agreed the correct light colour had been achieved.’

The theatre’s signature canopy forms a delicate focal piece of the Grade II listed building and is created in gold coloured leaded glass with draped bow design detailing. Despite the abundance of bright neon lights in the West End, the canopy has previously only been partially illuminated. Retaining the old world glamour of the 1905 constructed theatre and illuminating the canopy to compliment the original design was crucial to the project’s success.

Mark Bradbrook of Bradbrook Electrical explains: ‘We tried unsuccessfully for many years to light the leaded glass on the canopy of the Aldwych with all light sources only distorting the colour. The canopy was consuming a fair amount of electricity so the project was taken on to not only reduce the running costs but to achieve a new clean long-life light source.’

Initially, LED Light Sheet units were constructed with warm white 3700 Kelvin temperature LEDs which showed in testing to enrich the gold shade of the characteristic glass. Each unit was than fitted flush behind the glass to deliver consistency of illumination and eliminate the patchy light of previously tested systems. As the canopy is tapered at each end, shaped units of LED Light Sheet were created to match the shape of the glass panels and maintain even illumination at each canopy end.

All light panels were constructed with an ingress protection rating of 67 to protect against penetration from dust and water. The IP67 light panels and use of thermally managed LEDs help achieve the clean long-life light source desired by the theatre and deliver an electrical load of just 2.3amps for the canopy.